Although the eSeries wheel loader is electric it offers the same power and capabilities as the Avant 500 series compact diesel loader.

Two fully electric models are available, the Avant e5 and e6 models. Both electric wheel loaders have an integrated battery charger as standard, which makes it possible to charge batteries on a 230 volt 10A power outlet.

Avant e5 is equipped with a maintenance-free Absorbent Glass Mat (AGM) battery. You can charge the e5 fully in 5 hours and work with it between one and two hours. This makes the e5 a very good option if your work allows you to charge for a longer period.

Avant e6 is the first compact loader with a lithium-ion battery.  The e6 can be fully charged in just over an hour and you can operate between two to four hours with a full battery. The short charge time will practically allow you to work a full work day with e6 because you can charge the battery during your lunch break to full again.

The machine that will become your best friend.

The most important factors which have an effect on the working time are battery capacity and electric current consumption when working.

The e6 electric mini loader can work much more efficiently the whole day thanks to the more utilizable battery capacity and the possibility to charge the battery with a 400V rapid charger.

It is possible to work a full day with the e6 if it’s being charged during breaks whereas the e5 is more suitable for jobs where the work cycle is shorter and there is more time to charge the battery between the cycles – for instance, works like distributing feed to the cattle in the morning and in the evening.

The rapid charger considerably speeds up charging of the lithium-ion battery of the e6 considerably compared with the standard built-in 230V/10A battery charger.

A good way to charge the battery is not to let the battery run out completely and start charging when there is some 20 % charge left – then charging to 80 % takes just over 30 minutes with the 32A charger.

The rapid charger comes with a stand, so it is easy to relocate on the work site or to whole another work site if necessary. The stand is equipped with Avant quick-attach bracket in the rear, forklift brackets in the bottom and lifting lugs on top.

The running costs for e5 and e6 are significantly lower than any diesel-powered loader due to the lack of a combustion engine.

Electricity cost compared to diesel is roughly 75% cheaper. This will make the biggest difference in running costs when comparing e series to a diesel loader.

One of the advantages of battery-powered machines is simpler maintenance. The batteries and electric motors are practically maintenance-free, which means clearly lower maintenance costs for electric loaders.

There are also fewer checkpoints and there is no need to change engine oil, coolant, or engine filters in periodical service.

In practice, only hydraulic oil and filter (in e6 also battery air filters) must be replaced in electric loaders. The difference is clearly visible in service costs because the price of a periodical service of electric Avant loaders is about 50 % lower.

Advantages of an AGM battery are being maintenance-free, vibration resistant and ability to give out more current than a traditional lead-acid battery. However, compared to a lithium-ion battery the lead-acid technology is inferior in battery lifespan and work cycle, ability to give out current and charging speed. The battery is also heavier than a lithium-ion battery, however, in Avant it is a good counterweight when lifting heavier loads.

Avant e6 is equipped with a modern lithium-ion battery (LiFePO₄). The nominal voltage of this battery is also 48V and capacity 288 Ah /13,8 kWh, about the same as in e5. 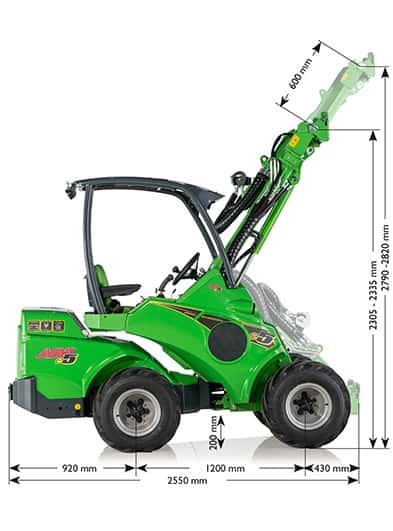 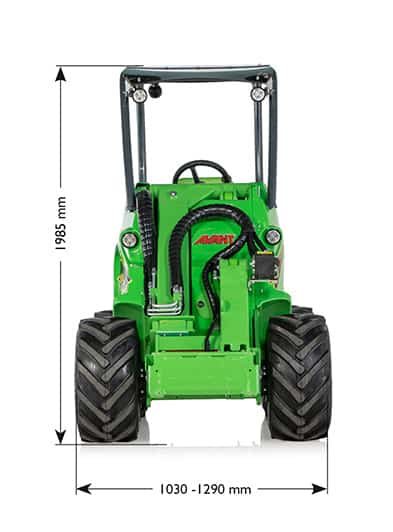 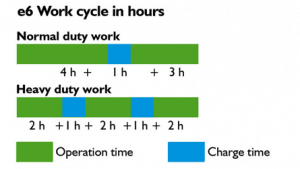 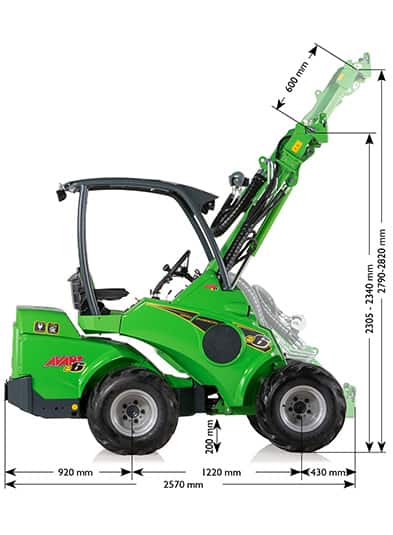